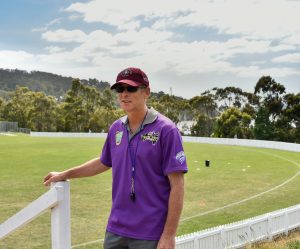 The Citizen of the Year has been presented to Tony Owen, for his outstanding contribution and commitment to improving community facilities and nurturing young people through the game of cricket.

Tony said he is very humbled by being nominated for this award, “I am passionate about cricket and how it provides the opportunity to bring young people together, along with their families and friends. I admit I am someone who doesn’t accept something can’t be done, we can achieve so much by supporting each other.”

Over two generations, Tony has encouraged young people to be active through cricket programs, which have helped them to experience a positive environment for them to develop.

He is the organiser of the three codes of junior cricket in Kettering: Under age cricket, Milo cricket and T 20 blast. Over 60 children participate in the Milo cricket, and Tony is clearly well respected by them all. His encouragement and guidance has influenced some of the young people to take on supporting trainer roles for the children, allowing them to develop leadership skills.

Cricket Tasmania has appointed Tony as the Coordinator for junior cricket for the Channel/Huon Cricket Association, which is testament to his achievements and abilities.

Tony has been the Kettering Cricket Club representative on the Kettering Hall Management Committee many times over the last 10 years and is now the Chair. He has been the primary influencer for improvements at the Hall and Oval, including the much admired white picket fence. Tony organised the materials, working bees, installation and painting. The community has applauded his efforts as the fence has added to the village atmosphere.

He is also responsible for the installation of a defibrillator at the hall, along with watering systems, solar panels and other stage and window items and repairs. His enthusiasm galvanises other members of the community to get involved, instilling much pride and ownership in the facilities.

Never one to sit still for long, Tony is now looking at grant opportunities for other facilities to make the oval and hall even more attractive for users and visitors. We received two nominations for Tony, which were full of words such as hard worker, nurturing, perseverance, honesty, integrity and commitment. He is a worthy recipient of this award.

Along with the above citation, a poem was submitted on the day of the words in honour of Tony. It was composed for Tony by Christina Hay.

Down the D’Entrecasteaux Channel where fish roamed wild and free

Sailors toiled from dawn to dusk harvesting the sea

There were orchards in the paddocks, men worked hard with horse and plough

And bounty from their labours can be gathered, even now.

Kettering had scarce entertainment so locals made their own fun

Actually, it was off to the pub when all the work was done.

One sporty soul said “Now then my lads, don’t waste time in the pub,

the cricket club revitalised will be a social hub.

Your energies will be deployed, an example to our youth

whose idle hands, if left unchecked, could soon become uncouth!”

After many meetings, discussions and some common sense

the cricket club reformed, on a paddock without a fence.

These country lads were mastering the game in a short while.

when hitting sixes these plucky caused the crowd to scream!

Their many daring feats were welcomed with lusty cheers

then after the game, off to the pub, to celebrate with beers.

as player and coach he created many successful teams.

Throughout the “Channel” his boundless energies range near and far,

Channel juniors have benefited, many have become a “star”.

His expert knowledge is freely shared with all who like to win.

Plus picket fence, solar panels and the score board on the rim.

We applaud the Kingborough Council acknowledging his worth

“Citizen of the Year Award”… Yes… “our Gus” is the salt of the earth!