Young Citizen of the Year 2018 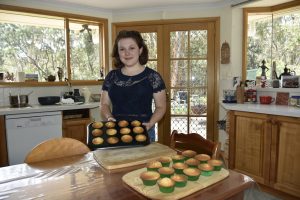 Freya Cox was recognised as Kingborough’s Young Citizen of the Year for her outstanding commitment to community service and human rights issues, and for her dedication to improving the wellbeing of others.

On receiving the award, Frey said, “I am thrilled and honoured to receive this award. I am particularly grateful to Edna Pennicott for all of the opportunities and encouragement she has given me to go out in the Loui’s Van service. It has been a humbling and enlightening experience.”

From a young age, Freya has dedicated many hours of her personal time to helping people in need.

She is a loyal supporter of the local charity Kingborough Helping Hands and volunteers for the charity’s Loui’s Van service. Every week for almost four years, she has helped cook and prepare food, which volunteers distribute to the homeless and other vulnerable people experiencing poverty or hardship.

Freya put her culinary skills to use as part of a team of young people who prepared a three-course meal to over 100 seniors at Council’s Intergenerational lunch. An important and valued event in Kingborough’s calendar, the lunch connects young people with seniors and encourages them to become involved in supporting their community. Freya embodies this ethos and influences others to follow the same path.

Out of the kitchen, Freya is committed to issues relating to racial tolerance and organised a petition to the Federal Parliament opposing changes to the Racial Discrimination Act. The petition attracted over 8,000 signatures and was presented by the Member for Denison, Andrew Wilkie MP.

Freya’s long list of achievements include: organising student participation for various charities as her school’s representative; becoming a successful writer and poet; undergoing animal handler and wildlife animal rescue training; participating in the United Nations Youth Association and Model United Nations locally, nationally and internationally; and representing Tasmania as a member of the State Debating Team in Queensland last year.

Kingborough Council is delighted to recognise Freya’s achievements and thank her for her outstanding contribution to the Kingborough community, she is an inspirational role model for  all.