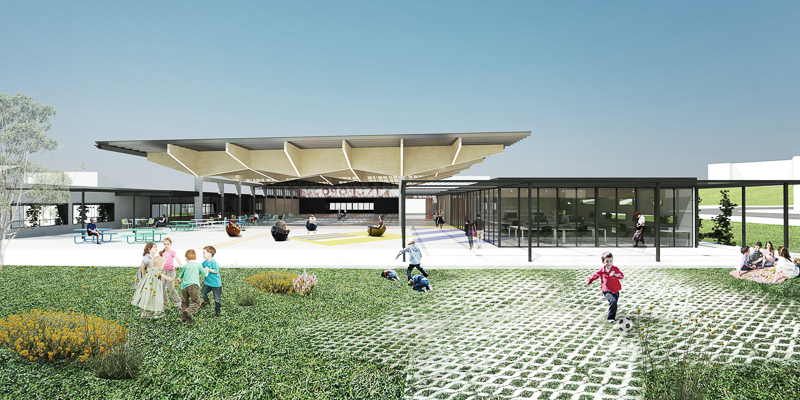 The centrepiece of the Kingston Park development will spring to life soon, following a successful Federal Government grant application made under the Growing Better Regions Fund for $2.8 million. The funding was announced by Senator Eric Abetz alongside the Mayor of Kingborough at Kingston Park.

The funding is a 50 per cent contribution for the Community Hub, which is the heart and soul of the Kingston Park development. It will encourage both community and economic activity, which will in turn support local initiatives and build community capacity. The vision for Kingston Park is that it will contribute to the stimulation and creation of a revitalised central business district and will lead to a viable self-sustaining community. It is the most critical single project for the economic future of the growing Kingborough municipality.

“As life-long Kingborough residents, the Mayor and I know just how important this local project is, which has been championed by the local council and I’m pleased to make this important announcement that the Federal Liberal Government will partner with the Kingborough Council to make the Kingston Park Community Hub a reality,” Senator Abetz said. “This development will be the first stage of a broader redevelopment of the Kingston Park site at the heart of the Kingston community.”

“The fact that this funding round was highly competitive demonstrates just how meritorious our project is, which will support the further development of one of Tasmania’s fastest growing municipalities and the most important commercial centre south of Hobart. This Federal Liberal Government funding will bring this long awaited project forward, and we expect infrastructure work will begin before Christmas”, Mayor Steve Wass said.

Activity on the site will begin late 2017 to early 2018, starting with the construction of the main road, followed by the Community Hub.

Kingston Park is being developed as a self-funding project, which will be covered by future residential and commercial developments within the site.

More information on the project can be found on our Kingston Park page.