Kingborough Council is administering a $1.5M grant from the State Government that will fund the implementation of a number of projects relating to visitor infrastructure and information on Bruny Island.

These projects need to be completed by the beginning of 2022.

In order to keep things moving during the current COVID-19 affected period, Council is seeking public comment on each of the projects during the next few months.

As you can appreciate, there are financial constraints in what can be done with the available money, which will need to be spread somewhat thinly across the various projects.

More information about the projects at Dennes Point, the waste disposal opportunities, and the community based visitor engagement program are below.

Feedback can be submitted to the Deputy General Manager, Tony Ferrier, by 15 May 2020 to tferrier@kingborough.tas.gov.au.

It is proposed that various measures be taken to improve pedestrian safety alongside this road.  Most of the road is to be line marked and frequently signposted as a shared road (walkway on one metre edge).  Where possible, the gravel shoulder will be reshaped to be a two metre walkway.  You can view the plan below which shows what is intended.

The main objective is to meet some essential disabled access requirements, although it also intended that other amenity improvements can be made, both inside and outside of the existing toilet block.  Council has commissioned an Access Consultant to advise on what is needed and a design of the proposed works will be commissioned soon.  Some initial public comment is welcomed.

About $200,000 is envisaged for these two Dennes Point projects.

The below plan shows that it will be necessary to consider a range of treatments alongside the existing road because of the difficult topography of this area.

Most of the pedestrian access would be located on an improved (widened) gravel shoulder with minimum width of 1.8 metres – widening to a minimum of 4.0 metres at the locations where there is currently boat trailer parking and carparking at the Captain Cook Monument.

At the boat ramp/jetty access, it is proposed to install pavement markings such as edge lines and pedestrian logos (similar to those on the Margate to Snug path) in order to provide a dedicated space for pedestrians.

Approximately $200,000 has been allocated for this Adventure Bay project.  Council is currently costing the proposed works and it is anticipated that it will exceed the available money.  It would therefore be appreciated if comments could also describe what are the highest priority sections of the road in regard to pedestrian safety.

The plans below show that it will be necessary to consider a range of treatments alongside the existing road.  The most significant (and expensive) component will be the proposed raised timber boardwalk and aluminium footbridge required to cross Barnes Creek, just south of School Road.

Plans for main road at Alonnah

About $500,000 has been allocated for this Alonnah project.  Council is currently costing the proposed works and it is anticipated that it may well exceed the available money.  It would therefore be appreciated if comments could also describe what are the highest priority sections of the footpath to be constructed.

Council has recently installed new public waste bins at Kingston Beach for both waste and reycling.

It is proposed that the same types of bins will be installed at Alonnah, Adventure Bay, Dennes Point and Roberts Point.  As indicated in the above photo, one bin is for general waste (to go to landfill) and the other is for mixed recyclables.  The bins will be placed on new concrete pads.

It is proposed that 12 pairs of bins will be installed on Bruny Island and they will replace most of the existing wheelie-bins in each of the above locations.  Please note that these are public place bins and they aim to improve on the existing situation (providing recycling opportunities where none previously existed).

They are not waste bins for domestic or private business use. 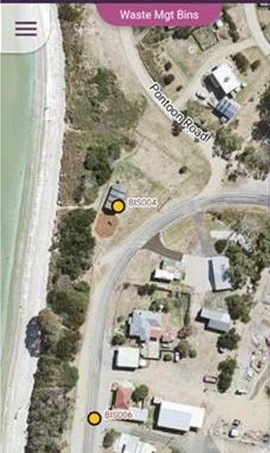 At Adventure Bay, there are nine 120L bins in the shop and community hall area.  It is proposed to replace them with four 240L waste and four 240L recycling bins at locations opposite the shop (BIS026), alongside the tennis court (BIS024), near the playground (BIS021) and at the beach access (BIS020). 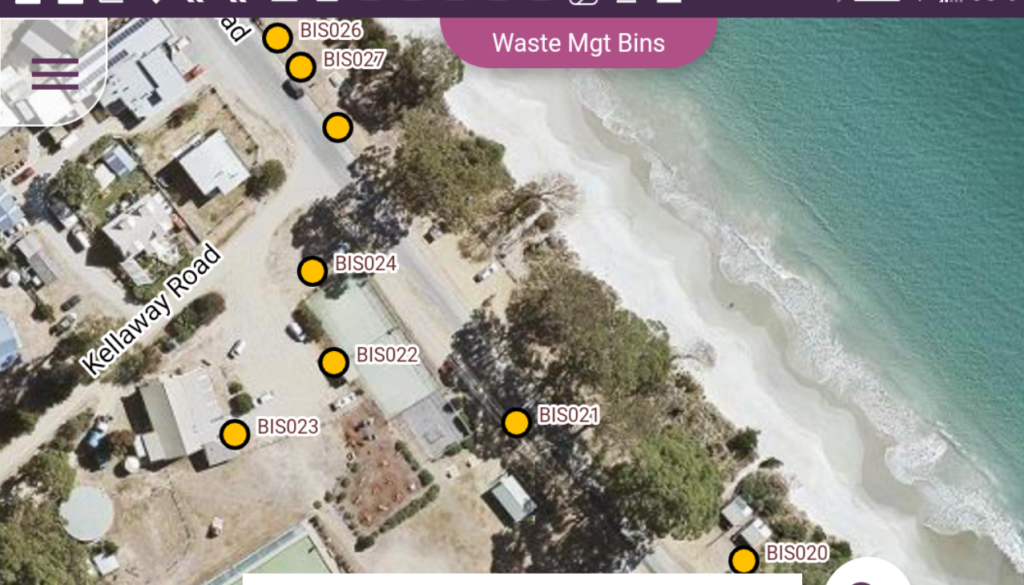 At Denes Point, there are two 120L bins near the community hall and at the public toilets on the foreshore.  It is proposed to replace them with two 240L waste and two 240L recycling bins at the same locations (BIN002 and BIN003).  The existing 120L bin (BIN001) at the jetty would remain.