The Kingston Blues Netball Club is one of the largest netball clubs in Tasmania, steadily growing each year with a range of members participating in competitions locally at STNA (Creek Road, Newtown) and in the top State League level of netball in Tasmania. Our club has over 300 registered members with 28 teams competing from 11/U through to State League.  Kingston Blues is always welcoming of new members, whether it be as a junior learning the game of netball, women wanting a strong skilled competition through to the highest level in the state.  We participate in 11/U, 13/U, 15/U, 17/U, 21/U, Women’s (1st Grade through to 6th Grade), Premier League and State League.

If playing isn’t your focus, we also have a strong pool of Coaches, Umpires and Committee that we develop and mentor.  If you are interested in any of these areas, please contact us.

We have 8 teams playing out at Creek road this season and are hoping to improve on that for next year. We train at the KNA courts midweek and have teams ranging from Under 15 through to 4th Grade.

The Kingston Mixed Netball Association aims to provide all netball players an avenue to play regardless of their abilities.

Games are played 5pm onward on Sunday nights indoors at the Kingborough Sports Centre. We have several different divisions catering for all standards from beginners to State players. Teams consist of 3 males and 4 females.

Umpires and equipment are supplied.

Organise your own team, or we may be able to find you a team if you’re looking to join one.

The Kingston Netball Social Club (KNSC) runs a womens only netball roster, with games played on Tuesday nights. Games are played indoors at the Kingborough Sports Centre. Players must turn 15 by the 31st of December. Games start from 6.30 with the last game being played at 9. The competition comprises of 3 or 4 divisions, catering for all abilities. Two seasons are run each year, the first season starts in January and finishes in July. The 2nd season starts in August and finishes in December.

Our website is www.knsc.com.au, or you can email us at kingstonnetballsocialclub@gmail.com or check out our Facebook page https://www.facebook.com/groups/1158290694231574 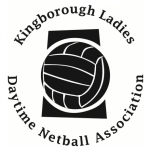 The Kingborough Ladies Daytime Netball Association (KDLNA) runs a women’s only netball roster, with games played on Friday mornings.  Games are played indoors at the Kingborough Sports Centre.  Players must turn 15 by the 31st of December.   Games start at 9.30am and 10.30am, and consist of 4 quarters of 12 minutes each.  The competition comprises of 3 or 4 divisions, catering for all abilities.  Two seasons are run each year, the first season starts in February and finishes in July. The 2nd season starts in August and finishes in December.  At the end of each season there is a Luncheon Presentation, child free, generally held at The Beach Restaurant in Blackmans Bay.  The competition is not played on school holidays.  There is free child minding provided by the Kingborough Sports Centre.