More from this section

A total of 22 representation were received during the formal exhibition process, both in support and against the proposed update of the Significant Tree List.

Council’s Agenda of 16 May 2022 provides an overview of those representations as well as Council’s officers recommendation to the Tasmanian Planning Commission (TPC) to update the Significant Tree List in the Kingborough Interim Planning Scheme 2015.

The TPC approved an update of the list as per Council’s officer’s recommendation and those changes became effective in the Planning Scheme on 12 September 2022.

The update of the list resulted in an additional 243 significant trees in Table E24.1 of the Kingborough Interim Planning Scheme 2015.

The updated list is available on Council’s Significant Tree Page as well as in the Kingborough Interim Planning Scheme 2015 . A copy of the TPC’s decision and their consideration of the submission received is available on the Austlii website (external link).

Many of the trees in Kingborough have significant aesthetic, cultural and/or historical importance.

In acknowledging these important values, Kingborough Council decided to establish a Significant Tree Policy. The policy outlines the process and the criteria to be considered for the listing or delisting of significant trees.

There are currently 24 listings (some of the listing represent groupings of trees – a total of 425 significant trees are listed).

More information about the current listings and the policy can be found here.

On 7 February 2022, Council agreed to proceed with public consultation on the proposed update to the Significant Tree list.

We are now seeking feedback on the proposed changes. Council is not inviting new nominations at this point in time until the current round of consultation is completed. New nominations will be called for at a later date.

What does the proposal involve?

The proposal is to introduce 11 new listings (representing 245 trees). The proposal also includes the delisting of 2 trees and an amendment to another listing. The trees that are recommended for delisting do not exist anymore. 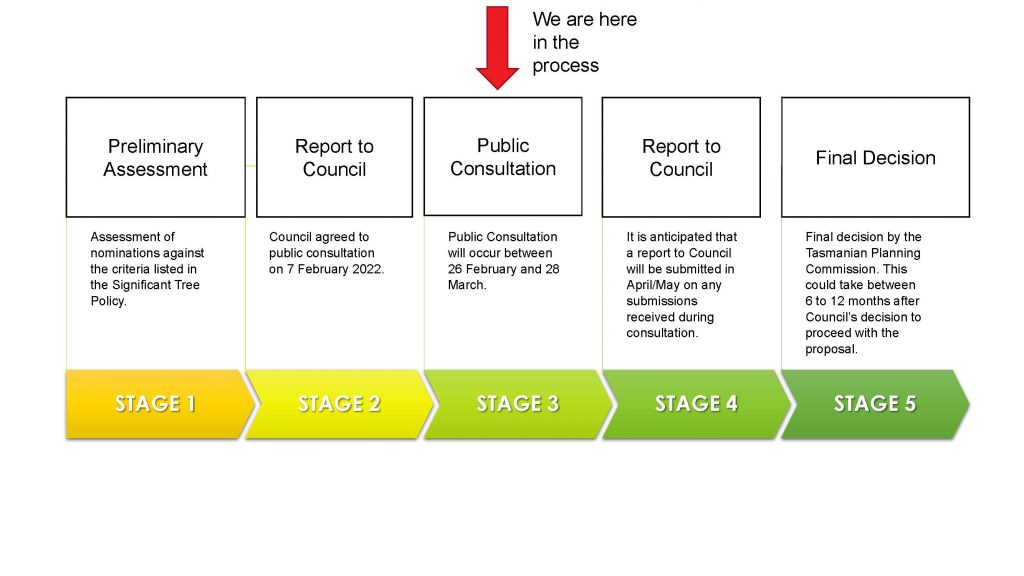 People who have made a submission during the public consultation period will have the opportunity to attend a hearing at the Tasmanian Planning Commission before a final decision is made.